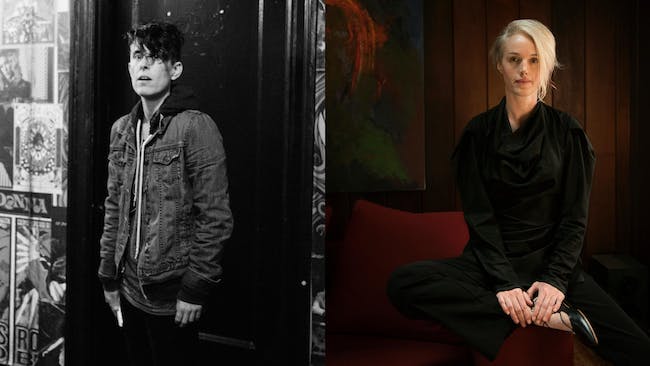 Out of an abundance of caution, we must postpone the Andrea Gibson + Zoe Keating performance on June 12th, 2021 at the Chautauqua Auditorium to the following date: October 2nd, 2021. All existing tickets will be honored. If you're unable to attend due to the new date, refunds will be available through March 20th, 2021 at point of purchase. Thank you for understanding.

Andrea Gibson touring to support their new book, LORD OF THE BUTTERFLIES.

In a fierce oscillation between activism and love, Andrea Gibson's newest literary triumph, Lord of the Butterflies, is a masterful showcase from the renowned poet whose writing and performances have captured the hearts of millions. An artful and nuanced look at gender, romance, loss, and family, this is also a book of protest. While rioting against gun violence, homophobia, and white supremacy, Gibson celebrates gender expansion, queer love, and the will to stay alive. Each emotion in Lord of the Butterflies is deft and delicate, resting within imagery heavy enough to sink the heart, while giving the body wings to soar.

Winner of the first ever Women of the World Poetry Slam in 2008, ANDREA GIBSON remains one of the most captivating performers in the spoken word poetry scene today. Known for pulling hearts out of chests to either wrench or kiss, Gibson has authored four full-length collections of poems, an illustrated book of their most memorable quotes (Take Me With You, Penguin 2018), and has released seven beloved albums. Gibson regularly sells out 500+ capacity standing room only venues to eager audiences, mouthing along every word, further popularizing the art form and creating a space for each person in the room to feel, and to heal.

"Gibson's poems...are forthright and pithy, putting into words the feelings of anyone who has been angry, or outraged, or embarrassed, or in love." - STAR TRIBUNE

"Andrea Gibson is an amazing queer, spoken-word poet who can make you weep with a heart wrenching love poem and then swiftly inspire you to action with a powerful political poem." - Seventeen

A cellist since the age of eight, Keating pursued electronic music and contemporary composition as part of her Liberal Arts studies at Sarah Lawrence College in New York. After graduation she moved to San Francisco and built a career as an information architect and data analyst while moonlighting as a cellist in rock bands. Keating eventually combined her love of music and technology, using a computer to live-layer her cello and performing for late-night after-parties in her San Francisco warehouse.

She is known for both her use of technology - which she uses to sample her cello onstage - and for her DIY approach, releasing her music online without the help of a record label.

Keating composes for TV, theater, film and dance. She composed, along with collaborator Jeff Russo, scores for the A&E series "The Returned" and for WGN's "Manhattan", a drama about the making of the atomic bomb. Her songs are used as bumper music for NPR’s Morning Edition, as the theme music to OnBeing, as the thinking-music of the Sherlock Holmes character on CBS Elementary and in countless films, commercials, TV shows and documentaries.

Her music has achieved a surprising degree of popular ubiquity for a DIY artist. Her self-produced album "One Cello x 16: Natoma" was four times #1 on the iTunes classical charts and her follow-up album "Into the Trees" spent 47 weeks on the Billboard classical chart, peaking at #7. Her music has been used in over 20,000 third-party videos uploaded to Youtube, in everything from dance performances, films, plays, live paintings, climbing videos and live gaming soundtracks. Her advocacy for DIY artists stems, in part, from her efforts to obtain some income from official and unofficial uses while at the same time allowing people to use her music in their own artistic expression.

A vocal advocate for the rights of artists and creators, Keating writes and speaks often about copyright and the mechanics of the music industry economy. She was elected a governor of the San Francisco chapter of the Recording Academy, named a Young Global Leader by the World Economic Forum and served as a boardmember of CASH Music, a nonprofit organization that built open source digital tools for musicians and labels.

In 2014, Zoë's husband Jeffrey Rusch, who founded the arts warehouse where they lived and where she started her music career, was diagnosed with stage IV cancer. While she halted her music career to care for him and their then four-year old son, their struggles with health care and insurance became a new subject of her blog. Following Jeff's death in 2015, Zoë continued to advocate for patients, data portability and the simplification of medical insurance, culminating in a meeting with President Obama in October of 2016.

In 2017 Zoë moved to Burlington, Vermont. Her latest recording, a four song EP called "Snowmelt", was released in 2018 and spent 10 weeks on the Billboard Classical Charts. She is currently working on another album.

"...a distinctive mix of old and new -- layers of sound, that feel more like orchestrations than a solo instrument. " - National Public Radio

"Swoon-inducing. Like taking a triple-shot of Absinthe before stepping outside of the bar just in time to see the sun exploding." -SF Weekly