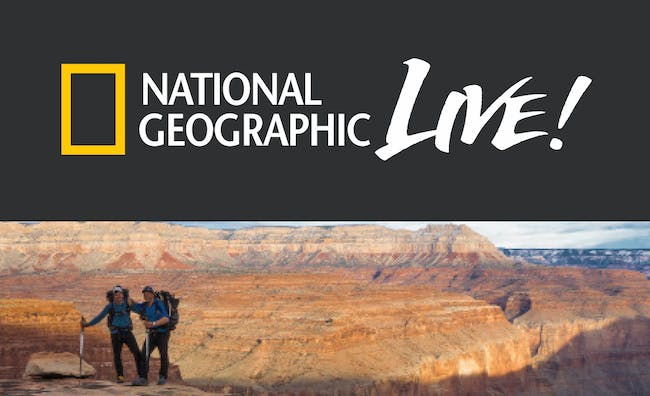 Between River and Rim - Hiking the Grand Canyon:

In an effort to share the Grand Canyon’s uncharted glory and shed light on the myriad threats it faces, writer Kevin Fedarko and photographer/filmmaker Pete McBride set off on an audacious and demanding adventure this year: to transect the length of the canyon on foot. This trek is not the pair’s first adventure together, but it may be the toughest.

An award-winning photographer, writer, and filmmaker, Pete has traveled to over 70 countries for a number of publications and companies, including National Geographic Society, Outside magazine, Patagonia, and The Nature Conservancy. A passionate conservationist, Pete has been named a “Freshwater Hero” by National Geographic.

Kevin left his post as a top editor at Outside magazine for the dusty abyss of the Grand Canyon. Kevin is the author of The Emerald Mile and his work has been featured in National Geographic Adventure, Esquire, and Time, among other publications.

Kevin Fedarko lives in northern New Mexico and works as a part-time river guide in Grand Canyon National Park. In addition to his travel narratives in Outside, where he worked as a senior editor, Fedarko’s work has appeared in Esquire, National Geographic Adventure, and other publications, and has been anthologized in The Best American Travel Writing in 2004 and 2006. Fedarko was a staff writer at Time magazine from 1991 to 1997, where his work helped garner an Overseas Press Club Award for a story on the assassination of Yitzhak Rabin. Fedarko earned a Masters of Philosophy in Russian history at Oxford in 1990.

Native Coloradan Pete McBride has spent two decades studying the world with a camera. A self-taught photographer, filmmaker, writer, and public speaker, he has traveled on assignment to over 75 countries for the National Geographic Society, Smithsonian, Outside, Esquire, Microsoft, The Nature Conservancy, and many more.

After a decade documenting remote expeditions from Everest to Antarctica as a photojournalist, McBride became frustrated with the short lifespan of magazine stories and decided to focus his cameras closer to home on a subject closer to his heart—his backyard river, the Colorado. Four years and 1500 river-miles later, McBride produced an acclaimed book, The Colorado River, Flowing Through Conflict, three award-winning documentaries and co-hosted a PBS TV program. Other watersheds soon called including a source-to-sea look at India’s sacred Ganges River. Upon completing the journey, The National Geographic Society named McBride a “Freshwater Hero.” Others, have called him the “Lorax of Rivers.”

His latest project, replaced rafting with walking—a lot of walking. Over the last year, McBride hiked the entire length of Grand Canyon National Park—over 700 miles without a trail. Moving on foot between the river and rim “was a remarkable blister builder,” but it had a purpose to highlight the challenges our national parks are facing as increased development pressures are poised to change the Canyon’s iconic landscape. After completing the journey, he and his hiking companion, author Kevin Fedarko, were listed by National Geographic as “Adventurers of the Year.”

When not lost on assignment or grumbling about his blisters, you can find McBride exploring the Rocky Mountains, practicing mandolin on his back porch in Colorado…or dancing.

You can see samples of Pete’s work at: www.petemcbride.com.