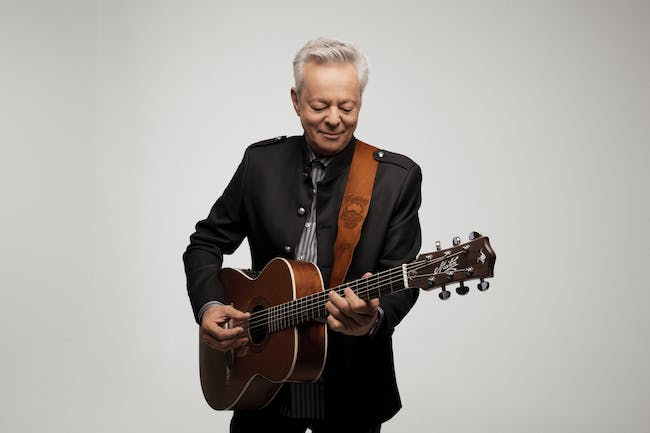 With the concern of general health safety, we apologize that we must cancel the Tommy Emmanuel, CGP performance on Saturday, August 29th, 2020 at the Chautauqua Auditorium. Refunds will be available at the point of purchase. Thank you for understanding.

“Songs are our teachers. They show us the depth of the human race and its unrelenting desire to create.” -- Tommy Emmanuel

Anytime you talk to any of Tommy Emmanuel’s fans, whether musicians or civilians, invariably they will speak of not one but two qualities that define his greatness. The first, predictably, is his extraordinary guitar playing. Considered by those in the know to be among this planet’s greatest guitarists, his playing is simply miraculous, as it would take three musicians, or more, to do what Tommy does solo. Who else, for example, when playing “Day Tripper,” can lay down the rhythm part, dig into the riff and sing the melody all at once on just one acoustic guitar?

Which brings us to the other aspect of his music always mentioned, and without which the first might not be as powerful or as infectiously appealing: the joy. Yes, joy. Because it’s one thing to play these multi-dimensional arrangements flawlessly on an acoustic guitar. But to do it with that smile of the ages, that evidence of authentic, unbridled delight, is an irresistible invitation to feel his music as deeply as he does. “The joy, he says, “is there always because I'm chasing it through music. Seeing the surprise in peoples' eyes is worth living and working for... I can't help but play to the people with all my heart, which is overflowing with joy of being in that moment that I’ve worked all my life for. And here it is!"

Although his expression is instrumental, he comes to the guitar much more like a vocalist, positively singing melodies through the strings. He inhabits the tunes he performs, delivering every nuance and turn of phrase. His own songs are also illuminated always with lyrical melodies that go right to the heart, such as his beautiful ode to his daughter, “Angelina,” or his great “story without words,” “Lewis & Clark.” That they resonate so deeply without words makes sense, as words only go so far. But music, coming from a genuine and joyful source, can go so much farther. Now with The Best of Tommysongs, he brings us a complete collection of his own songs, all rich with ripe melodicism and rendered with joy in real-time.

“When I was a kid, I wanted to be in show business. Now, I just want to be in the happiness business. I make music, and you get happy. That’s a good job.” --Tommy Emmanuel

Andy McKee is among the world’s finest acoustic guitarists. His youthful energy and attention to song structure and melodic content elevates him above the rest. He entertains both the eye and the ear as he magically transforms the steel string guitar into a full orchestra via his use of altered tunings, tapping, partial capos, percussive hits and a signature two-handed technique.

McKee’s crossover success has helped him to achieve millions upon millions of YouTube viewers, underscoring his emergence as one of today’s most unique and influential artists. His song, “Drifiting” became one of the first YouTube viral videos with almost 60 million views. He has been featured as a cover story in both Acoustic Guitar Magazine in the U.S. and Acoustic Magazine in the UK, and is also the figurehead of the unique Guitar Masters tours. He also curates his own annual guitar camp called Musicarium. McKee’s tour dates have taken him through Europe, Asia, Australia and North America, including tours with legendary acts including Prince and Dream Theater.

Live performances of Andy’s have become a point of fascination with his loyal followers. So, in late 2015, Andy decided it was time to release a live album. Featuring tracks from his entire catalog, Live Book was recorded live in December 2015 at The Melting Point in Athens, GA, the Red Clay Music Foundry in Duluth, GA, and Workplay in Birmingham, AL. McKee went through the recordings from all three shows and selected the finest takes of each set. Reflecting on the song choices, he looks to provide fans the chance to relive their favorite show. He strives to showcase the energy he creates for those who haven’t been able to attend a show and new fans alike.

“I’ve always wanted to do a live album; for quite a few years I’ve felt it’s something that has been missing from my collection of releases,” says McKee. “This album will feature some of my YouTube hits like ‘Drifting’ and ‘Rylynn’, some songs from my 2014 EP Mythmaker, and a cover of a Michael Hedges song called ‘Because It’s There’ played on harp guitar that I haven’t released before."

McKee is the first artist to be signed CGP Sounds, the record label founded by fellow guitarist Tommy Emmanuel. “I’m honored to be a part of his label. I heard Tommy 15 years ago at a festival in Kansas and was blown away by his playing and performing, and I still am,” McKee stated. “To be the first person on his label is surreal, and I’m excited and proud to be a part of it.”