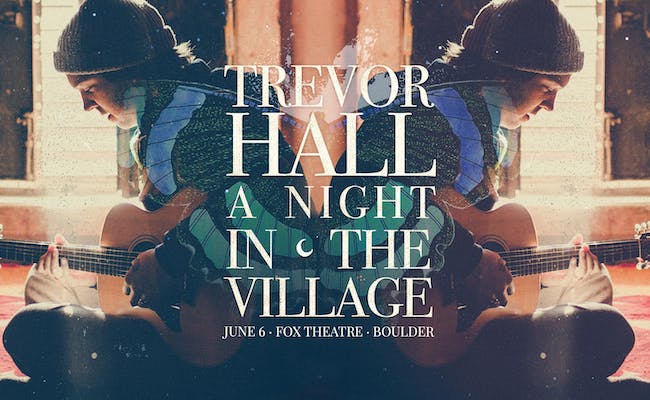 TREVOR HALL - A NIGHT IN THE VILLAGE LIVESTREAM

Trevor Hall - A Night in The Village

Free RSVP to watch the livestream.

Get an exclusive event poster for $29.95 (including shipping). Supporting via a poster purchase allows us to deliver this very special event with no admission fee.

Raised on an island in South Carolina, singer/songwriter Trevor Hall realized at a young age that music was more than just a passion - it was, rather, his life’s art. At sixteen, he recorded his first album, soon after which he left South Carolina for Idyllwild Arts Academy in California where he studied classical guitar and was introduced to the practices of yoga and meditation, which would greatly influence his life and his music.

Hall’s music, a blend of roots and folk music, is imbued with a deep love of Eastern Mysticism. This powerful symbiosis fostered a deep connectivity with his growing fan base and Trevor quickly matured into a leader of the burgeoning conscious musical community. Along with numerous pilgrimages to India, he has also completed a series of sold-out tours and collaborations with artists such as Steel Pulse, Ziggy Marley, Jimmy Cliff, Matisyahu, Michael Franti, Xavier Rudd and Nahko & Medicine for the People.

His previous full-length album releases, Chapter of the Forest (2014) and KALA (2015), debuted at #3 and #2 on the iTunes singer/songwriter chart respectively and were supported by extensive tours around the US and Australia. Beyond his intention to spread love and healing through music, Hall also collects donations to support children’s education in India and has continuously donated to charities and relief funds.

The Fruitful Darkness is Trevor’s first independent release — supported by his fans known as THE VILLAGERS — has become the #1 Music campaign of its kind in 2017 — after a decade plus recording for established labels such as Geffen and Vanguard. “There have been many hurdles and triumphs along the way” Hall reflects. “This album conveys the deep vulnerability of journeying through the unknown, as opposed to playing it safe.” Besides the change in infrastructure, the album itself explores completely new sonic terrain and is being released unconventionally, in 3-5 song installments on specific lunar dates. The full length album premiered at #4 on the Alt Charts, the most successful of Hall's career yet.